(I’ll have you guys know that I have attempted to write this a total of four times in the last few days and that once it was finally almost finished, I somehow deleted ALL OF THE TEXT…so…there you have it.)

So, when they finally had me start pushing again, it was about 6 in the morning, right before shift change. The night nurse, who had mistakenly mentioned that, once I was dilated enough, they could use a vacuum contraption to assist with getting the baby out, was now leaving and the nurse who admitted me 20 hours before, Shirley, was coming back on. Shirley was an older lady that I rather liked, except for the fact that sometimes when I would tell her things that were happening, she would either seem not to hear me or she would act as though I was making it all up. (Like, when I told her the pitocin made me puke all night, she gave me a weird look, almost rolling her eyes and said something along the lines of, “That’s weird, I’ve never heard of that happening before. Which, by the way, is interesting to me considering that even I had heard that before and I am, by no means, a labor and delivery nurse. Anyway…) When she came into my room to take over the “pushing assistance”, four or five other random people came in behind her. When I was pregnant, one of the things that I was totally against was having more people than necessary in the room during my labor and delivery. The thought of random strangers staring at my vagina (and under crazy bright lights, no less) was super disturbing for me. (I was aware that there would be a COUPLE of people there, as it would be their job to stare at my vagina, but I really didn’t think that there needed to be any extras, you know, like med students or anyone like that.) So, you can imagine how appalled I was when Shirley’s randoms came filing in and readied themselves in the vagina-viewing spot in my room.

I didn’t pay them much attention at first, because at that point, nothing mattered more than the whole thing being over. But then, some of the randoms, along with Shirley, actually started cheering me on. Like my own private random cheerleader ladies. And I was RIGHT THERE. It was about to happen and all I could think about was punching every last one of them in their stupid faces. So, I turned to Shirley and said, very seriously, “I need you all to STOP TALKING TO ME.” Shirley calmly asked the randoms to STOP TALKING but then continued to say things like, “You can do it! Push! PUSH!!!” and then I ripped the needle out of my arm and stabbed her in the temple. Okay. That didn’t happen. But it could have. This was not a joke.

I pushed for about 30 minutes before I asked the doctor for the vacuum contraption. Baby L was having trouble getting past my pelvic bone and, even though I couldn’t feel a lot of the pain because of the numbness in my lower half, I was still having a really hard time using my body as a tool to expel her and the pressure was becoming more than I could take. The doctor explained to me that we could attempt the vacuum, but that I would still have to push like hell and that if it didn’t work, I would have to have a C-Section. And I started to cry. And I said, “Do it.”

Two pushes later, and Baby L was lying on my chest and all of the punchiness had disappeared. Tears were rolling down MB’s face and I was so totally in shock that it was all over, I almost couldn’t even react. But then I looked at her. She was silent and her eyes were wide and she was the most beautiful thing I had ever seen. If you have ever had a baby, you know that it is impossible to put into words what that first moment is like. Because there is nothing like it in the world. You’ve made a perfect little person and you just met her…and you love her more than you ever thought you could love anything or anyone. And that moment was so emotional but so short and then they took her away to take her vitals and whatnot and I was awestruck. I felt high and cloudy and almost like I was out of my own body. And then the doctor reminded me that my work was not done and that I still had to deliver the placenta. This was nothing. In fact, I don’t think I felt anything at all and when she told me that it was out, I turned to her and said, “You can just throw that away, I’m not gonna eat it.” And then everyone had a good chuckle and seemed to forget what a heinous bitch I had been just a few minutes earlier. I guess they deal with that a lot. As I was told later, the randoms were surgical staff who were called in because no one thought I would be able to deliver vaginally and they were preparing to take me to the OR. I sure dodged that bullet. 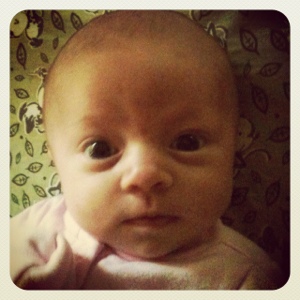 When I look back now, I can barely remember a time when I didn’t have her. I can’t imagine a world where I wasn’t so overcome with love and I can’t remember a time when I slept more than 4 hours at a time. The pregnancy that seemed as though it lasted an eternity, seems like it was just a spot in my memory (I’m sure that it wouldn’t feel that way if I went back and read this blog!) and my life before seems so trivial. And I can safely say, even after all of the resistance I had towards becoming a mom, I am the happiest I have ever been. I feel renewed and purposeful and elated that I have been given a WHOLE PERSON to love and to love me…FOREVER…

17 thoughts on “Once Upon a Time (The Finale…Wherein I Finally Had a Baby!)”