I don’t know if I mentioned to you, internet, that we finally got Baby L sleeping through the night. Alone. In her own room. It happened about two weeks ago, while MB wasn’t working and we were no longer willing to wake up 35 times per night to tend to one of the kids (Baby O is not really a problem but between the two of them, it was a little ridiculous). It started out pretty rocky. She hated me. She hated MB. And she cried like she was being murdered. But within two days of us being seriously adamant about her sleeping in her bed, she accepted her fate. She would sleep from 8 pm until around 6 am, usually waking once or twice, at most, and then NOT being a total asshole when we kissed her little forehead and laid her down again.

And that lasted TEN DAYS.

And then she became some sort of mutant baby. She went right back to screaming her head off, sometimes refusing FOR HOURS to nap and waking in the middle of the night and playing the “PUT ME IN YOUR BED” game for at least an hour until one of us gave in for the sake of our eardrums and our sanity, and let her sleep in our room. And two days ago, I almost ran away from home. To some place where no one interrupts your sleep.

With the schedule that MB is currently working, my day is starting earlier in order to be able to get the kids changed, fed and happy. You know, simultaneously. And with enough precision that no one is screaming first thing in the morning. For the most part, I am successful. But only if I time things perfectly. I spend all day just trying to keep the house in the same state it was in when I woke up. That state, you ask? Total disarray. But no more disarray at the end of the day than when I woke up. Because if it were any worse, I would feel like a complete failure. I follow Baby L around, cleaning up the remnants of the mini-tornado that she is, only to have another one created on the other side of the room as I do so. I diaper, feed, chase, rock, diaper, feed, rock, chase, clean, panic. Lather, rinse, repeat. All day. And then I bathe babies. And then I attempt a bedtime routine with Baby L as quickly as possible while Baby O is in his swing. HOPEFULLY resting quietly. Usually NOT. Because if there is ONE time of the day when Baby O is loud and pissed, it is when it is Baby L’s bath/bedtime. Once the fight about the lotioning and the tooth brushing is over, I put Baby L to bed. And usually, this isn’t so bad. Until that 3 am wake up call, which usually is as high-pitched and annoying as a pterodactyl, when I am ripped out of a semi-decent sleep (which is usually taking place on the couch) to calm her and start the process of getting her to sleep all over again. ALL OVER AGAIN.

I usually fail miserably at this.

And then I dump her into the bed with MB because I can’t take any more. And then Baby O wakes up. And I change him. And then I feed him. And then I put HIM back to sleep. And then, if I am lucky, I can sleep for another hour before MB wakes up and leaves for work. Again. Abandoning me with angry, demanding little people who are out for blood. The blood of Mommy.

I really still do love being home with the kids. Because, even though they can be monsters, they are MY monsters and I MADE them. And they are beautiful and funny and seriously entertaining and I love them to pieces.

I just wish they came with pause buttons. Or, I like, I could put them on vibrate. 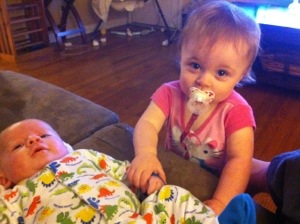