I want to write about L turning two. I really do. But it happened so quickly that I can’t even put any of it into words. I can’t believe that I have a two-year-old and in a little over a week, Baby O will no longer be a BABY. He will be ONE. And I will be the mommy of TWO EFFING TODDLERS. How did this even happen?

Things with O are progressing just as they did with L. He didn’t have much interest in getting around on his own until just a couple of weeks ago. It seems like a lightbulb went off inside his head and he suddenly said, “Hey. Wait a minute. I guess if I want to get from HERE to THERE, I need to get on this shit.” And he did. He isn’t walking yet, but he is really trying. Like, if you try to put him down on the floor into the seated position, he hurls himself backward in protest. Sitting is NOT COOL, you guys. Not cool at all. So he crawls and opens cabinets in the kitchen and knocks things over and rips paper things apart. And, even though I seriously JUST DID THIS with L, I had forgotten how crazy babies are when they are just starting to explore their world. Holy shitballs. I am in so much trouble.

L is a sassy little thing. And O is on the move. There are tantrums and loud crashes and Play-Doh eating (purple is the favorite). There is the bumping of little noggins and the fighting over toys. There’s transitioning from formula to whole milk and solids only. There’s potty training looming on the horizon and just SO MUCH NEW STUFF.

I love that, in the near future, the kids will be able to enjoy (or not enjoy so much) each other’s company. They will be able to play together at a more even level and they will learn from each other. I am so excited for all of that. But man, it sure terrifies the shit out of me. I remember that short time when I only had the one kid. I remember how difficult I thought it was. And now, present me wants to go back in time and slap the shit out of past me for ever complaining about it. Because SHIT JUST GOT REAL. I have definitely eaten my words. Definitely.

L’s tantrums stem from everywhere. She isn’t as bad as some two-year-olds I have seen. But she definitely is a drama queen. Yesterday, she had a coronary because O was eating a cracker. So, I gave her a cracker. Then she screamed more. Because she did not want a cracker. Today, she is obsessed with her juice cup. If there is no juice in her cup, there is a meltdown. If I take the cup to refill it so that there will BE JUICE IN THE CUP, there is a meltdown because she is not holding the FULL CUP yet. It is challenging. And sometimes I do want to run away from home. But mostly I think that a good pair of ear plugs would be sufficient. Well…maybe.

The other day, a friend attempted to do a Cake Smash photo session with O. And HE was the one having an epic meltdown. Because it would definitely be too much to ask that BOTH of my children be in a good mood at the same time. This is pretty much how it all went down. 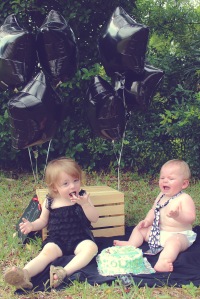 This about sums it all up.

7 thoughts on “The Times, They are A’Changin’”