Well, internet, I survived my baby shower and didn’t even have to punch anyone in the throat for molesting my “baby dome” (as MB is now calling it).

The big party was last Saturday (and pardon my absence here but there have been piles of goodies to sort through, appointments and a lot of eating. You know, because…well…eating is EATING.) I woke up Saturday morning (at 6 am), for the first time in a long time, completely sick. And when I say sick, I mean FIRST TRIMESTER sick. I felt ravenously hungry but totally nauseated and disgusting. I felt bloated and horrible and UGLY. So, as you can imagine, I was not too thrilled to have to try and make myself presentable to see all of my nearest and dearest. But, out of this disgusting funk came one of the best, most hilarious moments of my pregnancy thus far. I don’t know if I have mentioned to you, internet, that I can no longer reach my toes. In preparation, last week, for the shower, I attempted to paint my toenails. RED. (Why? I have no idea. My toenails are always done, but they are also always done in a french manicure because…I am really good without stencils and/or a huge belly.) I’m going to cut this short and just tell you that this was the longest process of my life and I believe I may have broken a rib. So, on Saturday, I asked MB (who had offered several times before) to help me to use a glorious salt scrub on my piggies so that they a) didn’t look so heinous and b) didn’t feel like sandpaper. (I know you guys are really intrigued by the state of my feet, so I will go ahead and tell you that, no, they are not yet swelling.) I am weird about feet and people touching mine (or having to touch anyone else’s) and am extremely ticklish, so I kept maintaining that I could scrub my own feet, until the broken rib happened. So I agreed to let MB help me out. OH. MY. GOD.

I situated my gigantic ass on the side of the tub and braced myself, but I swear I started laughing hysterically before MB even touched me. And I laughed like that and squirmed around for an entire 10 minutes while my wonderful, amazing, fiance attempted to beautify the piggies. I told him later that I wished that I would have had the whole thing on video because it was exactly the kind of thing that I would want my daughter to see when I explain to her what kind of man she should pick. One that will attempt to scrub your feet, even if you are dangerously close to kicking him in the face. That, my friends, is a good man. But I digress…

The shower started at one, and despite all of my pleading with friends and family to properly RSVP, many more people showed up than anticipated which turned my mom into a raving lunatic. I, even though I felt like a total crap bag, was pleased that so many people showed up and were so ridiculously generous. My mom and sister (and even my step-dad, who painstakingly fashioned a beautiful banner welcoming Baby L) did a really cute job decorating and the food, I hear, was divine (thanks to my Uncle/Personal Chef) and mom and sister. I was disappointed that I didn’t even get to eat, partially because I was afraid that I might not be able to keep anything down and partially because the house was so crowded, I wasn’t really even able to get TO the food. (Except the cupcakes, because HELLO. CUPCAKES.) I have to say, it was pretty unlike any baby shower I have ever been to (for me) because a) there were men there, which made me feel better about the universe, and b) the only part of it that felt even remotely shower-y to me was the opening of the gifts. (Which took a really long time, but my sister was clever enough to distract guests with Bingo cards, so not only did people pay attention to the gifts, but they weren’t pissed off about having to sit there and do so for hours on end. I highly recommend…I felt less like I was the center of attention and more like I was working at the nursing home again, where I used to call Bingo for the Alzheimers patients. Not that I am comparing my guests to Alzheimers patients. Well…I mean, most of them are not at all like Alzheimers patients anyway. Either way, they didn’t really care about ME, they just wanted that bottle of wine. Can you blame them?) To be honest, though, the whole thing is kind of a blur. It was a really great day shared with really effing amazing people and I really appreciate all of the love we received (in the form of hugs and gifts and belly rubbing).

Now that I have mentioned the belly rubbing, I guess I should touch on that, since I was fairly certain that it would occur whether I liked it or not.

I have to say, I was actually surprised at the lack of belly rubbing. There were only a handful of people who actual dared to rub the dome. And to be totally honest, the people who did, did not offend me. My old friend TC, who I never get to hang out with and with the help of another of our friends, has now ousted me from the “No Babies for Me” Club, was the most belly-happy of the guests and, even though she probably knows and doesn’t care, (she’s a bad ass like that) that I didn’t want anyone touching it, she did it numerous times. And I didn’t even THINK about hitting her. It actually wasn’t as awkward as I thought it might be. But maybe it just depends on who does it. In fact, my mom has only attempted touching my belly ONE TIME. So, how the hell should I know how I am supposed to feel about it. After the shower was over, however, came the real belly extravaganza when my sister, Fish Head and her husband, Mr. Fish Head cornered me in the garage and while Mr. Fish Head attempted to rouse Baby L by singing Phil Collins songs or quoting Hitler (I think this was an attempt to really piss her off), my sister pressed her entire face to the other side of my belly. This, my friends, was a mite awkward. And really, if they hadn’t been Mr. and Mrs. Fish Head, I am pretty sure they would have been swimming with the fishes. Even that, though, really wasn’t the worst thing to ever happen. It was definitely less annoying than stretch marks. So…there you have it. Maybe I am not anti-belly-touching altogether. Who knew? 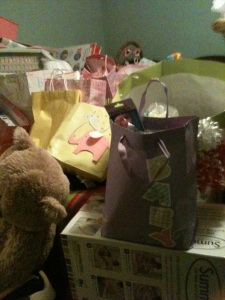 This used to be our spare bedroom. And then it exploded with baby items!

Anyway, I do want to thank all of the lovely people who came to celebrate our new addition. Sometimes, and I think this is common in people, I forget how many wonderful people I have in my life and not because I don’t appreciate you all, but because there might be distance, or our every day lives have made it hard to be together. You all just reminded me how truly lucky I am and how truly loved Baby L is already. THANK YOU. Each of you for all the love, and the loot! 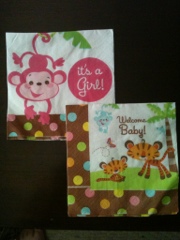 6 thoughts on “On Showering”

Leave a Reply to AM @ dearexpletivebaby Cancel reply